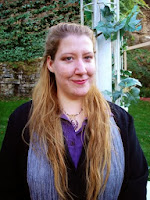 Author: Shauna Aura Knight
Best known works: A Winter Knight’s Vigil
Where you can find her: Website / WordPress / Facebook / Twitter
Top writing tip: Finish what you're writing. Then submit it for publication. If you don't finish what you write or submit it, you'll never get published.

Hi Shauna, we see you about a lot on Pagan Writers Community. It's great to finally get a chance to chat about your work.

Can you start by telling us a bit about yourself, and what has led to this book?

I’ve always been interested in creative work. I’ve been a professional artist and graphic designer, I’ve done tech theater and theatrical design work, I’ve done reproduction Star Wars scenery for Science Fiction conventions, I’ve worked at the Renaissance Faire, I’ve lived in a cabin with no running water, and these days you can find me teaching Pagan leadership and ritual facilitation at various Pagan festivals and events around the country. I’d say that all of that has led to A Winter Knight’s Vigil, and the other books I have coming out.

You're clearly very involved in the Pagan world. When did you first realise your calling?

I was about fifteen when I realized that's what it was called, but my parents were both sort of hippy, woowoo, mystic-types, so I was raised discussing and even exploring past life regressions, channeling, chakra healing, dreamwork, psychic abilities, Atlantis, Edgar Cayce, Reiki Healing, Akashic Records, White Light energy healing angels, goddesses, and all that.

I did a report on Paganism when I was fifteen and finally understood that that's what I was. It wasn’t until my early 20s that I ever really found other Pagans, and not until my late 20s that I found the type of ecstatic Pagan ritual work that really called to me.

When did you begin writing?

Do you ever dream about writing?

No, but most of my stories have their genesis in my dreams. Some of my stories come from these huge, epic dreams. I think that the mythic language of dream, and that particular potency a nightmare offers to the conflict and inner workings of a character, will make for some really engaging reads.

What has been your experience of the publishing process?

I have both fiction and nonfiction published through Jupiter Gardens Press and A Winter Knight’s Vigil is published through Pagan Writers Press, but I'm also working on some self-published nonfiction pieces. I really enjoy the process of getting to work with an editor and publisher. It can be tricky sitting alone at my computer trying to edit my work to perfection, or come up with the perfect blurb. It’s great to have someone else doing a final pass through and making suggestions.
You mention other pieces you have written, can you tell us a bit about them?

This is my second published piece of fiction. The first is Werewolves in the Kitchen, a paranormal romance released as part of an anthology at Jupiter Gardens Press. That will be released as a standalone along with another novella, The White Dress: The Autumn Leaves, early next year.

I've had numerous nonfiction articles published in various Pagan publications over the years focusing on Pagan leadership and ritual facilitation, with two books released through Jupiter Gardens Press: Spiritual Scents and Dreamwork for the Initiate's Path.

How long does it take you to write a book, are you a fast writer or a slow writer?

This definitely depends. I have stuff I've been writing since I was twelve, and other stuff that took me a year, or even just a month. I'm a pretty fast writer when I have focus, time to work, and a deadline. All too often I've let myself get stuck waiting for the "bolt of lightning" to hit, to resolve a plot question, and then a decade passes and still no lightning, and that story is still left hanging and unfinished. What I’ve found is that I really have to push myself to sit and write, to push through something that is unfinished in a story. But if I actually work on the piece, I’ll usually find a way to finish the story. So, now I have books I’ve been working on for decades but I’m finishing them off pretty quickly because I’ve had rather a lot of time to think about them.

Do you plan your stories before you begin?

Absolutely. For me this is more crucial with the big epic fantasy stories but, even with a novella, I have a pretty good idea of the arc of the story and the growth of the characters before I start writing more than just a scene or two. Sometimes the characters will take me on a tangent. Other times, I know that something happens, but I’m not quite sure how, or what happens before that, so there’s definitely an organic element as well. As the characters come alive, they sort of offer their own guidance on the matter.

Where do you go when you need to recharge your creative juices?

I call it cave-dwelling. Being home and working on writing is one of the ways I recharge. I also love to paint. When I’m really needing a recharge, I will curl up in bed with a fantasy or paranormal romance story.

How did the topic of your book come to you?

A Winter Knight’s Vigil came from a few things. I had a story dream, just a snippet really, however the scene from the dream reminded me of a time when I was out in a woodland cabin with a group of friends. We weren't really a coven, not yet. Except, we had massive group dynamics issues from hidden romantic relationships. Of the six of us, three were entangled with the one guy. So I thought, well, wouldn't that be interesting to explore as the foundation of the conflict of the story? Or, what if it was a healthier coven where they had a rule, like some covens do, that covenmates can't date, to prevent situations like what I went through? And what if two of the members of the coven fall for each other anyway and then they have to deal with it?

I also intentionally wanted to explore some of the tropes in romance novels that aren’t always the most sex positive. I don't think I've ever read a romance novel where the heroine doesn't just amazingly have these simultaneous orgasms with the hero, which just isn’t realistic for a lot of women. I know that I, and other women I know, had a lot of shame around our first experiences of sex because our expectations were built up on what’s portrayed in the media and romance novels. Since part of my own spiritual work is activism around sex and health, and helping people move past shame and misinformation, I thought I’d work with sex that was maybe a little bit more realistic. And do that in a way that was still hot.

That sounds like a really important idea that isn't often explored. Can you tell us more about how this is addressed in your current novel?
A Winter Knight’s Vigil takes place in a woodland cabin the weekend of the Winter Solstice. Amber has been in love with Tristan for a while, but she hasn’t done anything about it because the coven has a rule — no dating amongst coven members. The group begins to do some fairly intense personal shadow work during the weekend. They’re doing trancework in an ecstatic ritual and Amber finally lets her feelings for Tristan slip. They try to keep their distance, but, as the ritual work intensifies, it just draws the two of them closer together.

What do you do when you fall in love with someone, when you find that someone you actually want to be with, but to be with them means betraying a commitment you made to your group? Tristan and Amber find themselves struggling with that as their group continues to do deeper and deeper ritual work.

There are a few excerpts available on my blog.

How important is the online community to your writing?

The community that has been easier for me to build is more on the Pagan leadership, ritual facilitation, personal growth side of things, to be honest. I've been traveling and teaching these skills for such a long time, and I've met so many people, it's so easy to strike up a conversation on my Facebook wall about community building or leadership or ritual arts.

Building up a community around my fiction is going to take a little more time, I think. I can always think of something to write about on the topic of Pagan leadership. It's harder for me to think up something that my fiction readers might find interesting.

What are your future plans for writing?

I have a lot of fiction and nonfiction books in the works. Most of my upcoming fiction will be paranormal romance, and I’m working on a longer Urban Fantasy series as well as some epic fantasy. Swords, sorcery, vampires, shapeshifters, psychics, mages… all sorts of cool stuff. At the same time, I’m also working on writing specific to the Pagan community, books and articles on dreamwork, Pagan leadership, facilitating rituals, and other personal and spiritual growth work.

Thank you so much for taking the time to talk to us Shauna. We wish you the very best with all of the projects you've got on the go. 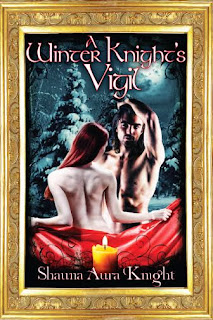 Comments are moderated. There may be a delay between posting your comment and it appearing. Thanks for taking the time to get involved.